By Wolf Richter for WOLF STREET.

Bond fireworks lit up the sky on Friday, following the release of the jobs report that dashed fervent hopes in the bond market that crummy employment numbers would cause the Fed to back off its rate-hike tango before it even gets started. Over the past few days, reports were bandied about that explained why the jobs number would be anything from dismally low to hugely negative. But the numbers were far better than expected – they were actually pretty good for all kinds of reasons – and instantly yields spiked and mortgage rates shot higher.

The one-year yield spiked 11 basis points to 0.89%. This is up from near-0% in September last year. Over those five months, the world has changed.

The one-year yield and the two-year yield are particularly sensitive to the market’s outlook for monetary policy changes by the Fed – namely the dreaded rate hikes this year and next year, as CPI inflation has hit 7.0%.

Despite these jumps in yields, they remain ridiculously low and deeply negative in “real” terms: Minus CPI inflation, the one-year yield is still -6.1%; and the two-year yield is -5.7%. 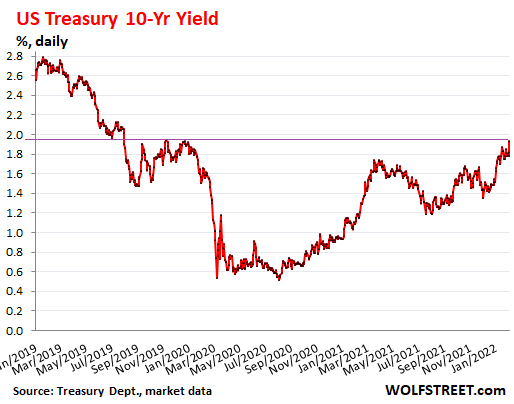 The price of the iShares 7-10 Year Treasury Bond ETF [IEF]which tracks Treasury bonds with remaining maturities between 7 and 10 years, fell 0.8% on Friday and is down about 9% from the range in April-September 2020. The ETF yields 0.9% annual, and Friday wiped out nearly a year worth of yield.

The price of the iShares 20+ Year Treasury Bond ETF [TLT], which tracks Treasury bonds with remaining maturities of 20 years or more, fell 2.1% on Friday and is down about 18% from the peak in July 2020. The yield is currently 1.6% annual. A few hours on Friday incinerated well over a year’s worth of yield.

Mortgage rates spiked on Friday, nearing 4%with the 30-year fixed mortgage rate reaching an average of 3.85%, according to the daily index by Mortgage News Daily. This is the highest rate since late 2019 – except for the rate chaos in March 2020, when rates spiked and plunged from one day to the next: 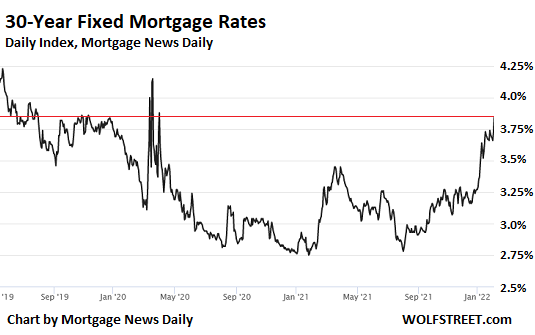 The 30-year mortgage rate moves roughly with the 10-year Treasury yield, but with a spread, given that the average 30-year mortgage is paid off in less than 10 years, either because the homeowner sells the home or refinances the mortgage.

And these increases in Treasury yields and mortgage rates are a reaction to what the Fed is about to embark on: The next rate-hike cycle and the next quantitative tightening (QT) cycle, which will do the opposite of what the Fed’s interest rate repression and massive QE had done. The Fed has been communicating its plans, and Powell locked in the date for the first rate hike: March 16.

One, people rush to buy a home to lock in the still low mortgage rates; so initially, rising mortgage rates create a flurry of activity.

And two, with each uptick in mortgage rates, more homebuyers hit the ceiling of what they can afford, and they drop out. This is not visible in the data at first since those people are outnumbered by the flurry of people desperate to lock in the low mortgage rates.

Enjoy reading WOLF STREET and want to support it? Using ad blockers – I totally get why – but want to support the site? You can donate. I appreciate it immensely. Click on the beer and iced-tea mug to find out how:

Would you like to be notified via email when WOLF STREET publishes a new article? Sign up here.